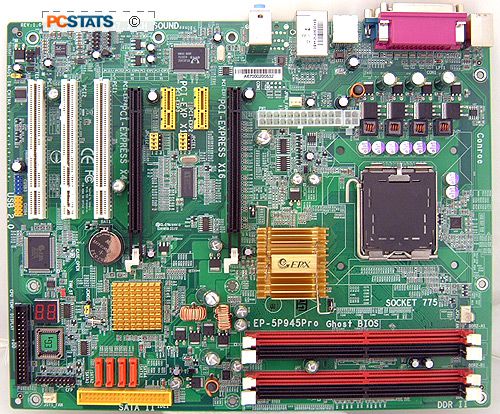 A system bus is a single computer bus that connects the major components of a computer system, combining the functions of a data bus to carry information, an address bus to determine where it should be sent, and a control bus to determine its operation. A system bus is kind of like all the train tracks that connect the CPU (the grand central station) with the computer memory (the houses of addressable data) and with the neat devices that let us interact (like the mouse, keyboard, screen, and audio system).
533 MHz 1066 MHz
Support Hyper-Threading Technology:
yes
Support for multi-core processors:
yes
Chipset EPoX EP-5P945-J
Chipset:
Intel 945P / g chipset
BIOS:

Acronym for basic input/output system, the built-in software that determines what a computer can do without accessing programs from a disk. On personal computers (PCs), the BIOS contains all the code required to control the keyboard, display screen, disk drives, serial communications, and a number of miscellaneous functions. The BIOS is typically placed in a ROM chip that comes with the computer (it is often called a ROM BIOS). This ensures that the BIOS will always be available and will not be damaged by disk failures. It also makes it possible for a computer to boot itself. Because RAM is faster than ROM, though, many computer manufacturers design systems so that the BIOS is copied from ROM to RAM each time the computer is booted. This is known as shadowing.
Award
SLI/CrossFire:

Alternately referred to as Multi-channel memory, Dual-channel memory is a DDR, DDR2, or DDR3 chipset on the motherboard providing memory with two memory channels instead of one. The dual-channel platform helps alleviate bottlenecks that occur. Dual-channel lets one controller handle the reading and writing while the other controller prepares the next access thus preventing a delay.
yes
Maximum memory:
4 GB
Disk controllers EPoX EP-5P945-J
IDE:

Short for Integrated Drive Electronics or IBM Disc Electronics, IDE is more commonly known as ATA or Parallel ATA (PATA). It is a standard interface for IBM compatible hard drives and CD or DVD drives. IDE is different than SCSI and Enhanced Small Device Interface (ESDI) because its controllers are on each drive, meaning the drive can connect directly to the motherboard or controller. IDE and its updated successor, Enhanced IDE (EIDE), are common drive interfaces found in IBM compatible computers. Below is a picture of the IDE connector on the back of a hard drive, a picture of what an IDE cable looks like, and the IDE channels it connects to on the motherboard.
number of slots: 1, UltraDMA 100
SATA:

Short for SerialATA, SATA 1.0 was first released in August 2001 and is a replacement for the Parallel ATA interface used in IBM compatible computers. SerialATA is capable of delivering 1.5 Gbps (1500 MBps) of performance to each drive within a disk array. It has the benefit of being backwards-compatible with ATA and ATAPI devices, and offers a thin, small cable solution, as seen in the photo on the right. This cable helps make a much easier cable routing and offers better airflow in the computer when compared to the earlier ribbon cables used with ATA drives.
number of connectors SATA 3Gb/s: 4
Expansion slots EPoX EP-5P945-J
Expansion slots:

Alternatively referred to as a bus slot or expansion port, an expansion slot is connection or port located inside a computer on the motherboard or riser board that allows a computer hardware expansion card to be connected. For example, if you wanted to install a new video card in the computer, you purchase a video expansion card and install that card into the compatible expansion slot.
1xPCI-E x16, 2xPCI-E x1, 3xPCI
Audio/video EPoX EP-5P945-J
Sound:
7.1CH, HDA
Network EPoX EP-5P945-J
Ethernet: 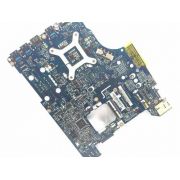 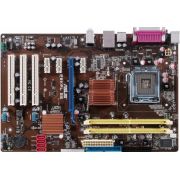 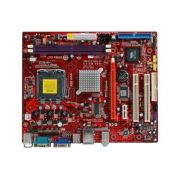 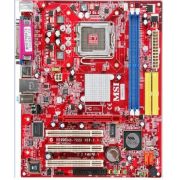